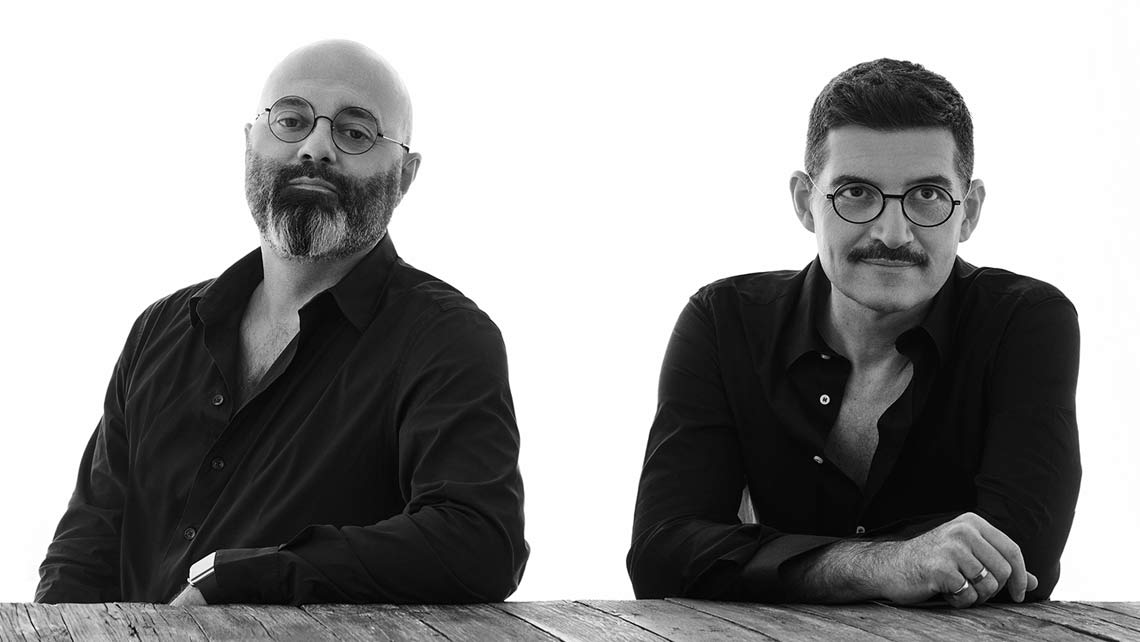 Fabio Calvi was born in Pavia in 1969. After studying at the Milan Polytechnic and Brunel University of West London, he graduated in Architecture in 1996. He collaborated with Gianfranco Frattini and later with Ferruccio Laviani, to then open his own I studied in 2004. For eight years he was art director of all the installations, events and sales points of Flos.

Paolo Brambilla was born in Lecco in 1973, studied at the Milan Polytechnic and the Polytechnic University of Barcelona and graduated in Architecture in 1999. He received the honorable mention at the Europan 6 architecture competition in 2001. Since 2005 to 2013 he taught Interior Design at the School of Design of the Milan Polytechnic. Today he is a Councilor of the Order of Architects PPC of Milan. Since 2006 Fabio Calvi and Paolo Brambilla have worked together designing private residences, offices, shops, installations and products. They designed for Arketipo, Barovier & Toso, Bialetti, Cassina, Comfort Zone, FontanaArte, Flos, Grohe, Molteni & C., Saba, Serralunga, Olivari, Tonelli, Varaschin and Zanotta. In 2015, the exhibition project set up at the Palazzo della Permanente in Milan on the occasion of the 50th anniversary of the foundation of FLOS received the report to the Gold Medal of Italian Architecture of the Milan Triennale. The same year the studio won the "LC50" invitation-only competition for the creation of an installation in the Cassina showroom in Milan while the project for the Zanotta stand at the Salone del Mobile was selected for the ADI Design Index 2016.
Fabio Calvi and Paolo Brambilla have been working together since 2006 designing installations, private residences, offices, shops and products. In 2007 they created the project for one of the rooms of the Tsunagu exhibition curated by Kengo Kuma at the Milan Triennale. They design products for Frag and Varaschin and have created installations for Arketipo, Comfort Zone, Flos, Mitsui Fudosan Residential, Olivari and Serralunga.